Development of irrigation and drainage in Bulgaria

(ne postoji na srpskom)
In Bulgaria, rainfalls are insufficient and unevenly distributed from July to September. Most frequently draughts occur from August to September, which determines the need of irrigation. Irrigation on large scale began to be practiced in the 15th century when rice growing was introduced in the Maritsa River Valley. In 1920 water Syndicates (joint state and cooperative associations) were established by special low and a State Water Development Program was initiated. Intense development of irrigation and drainage took place after the Second World War. Till 1989, irrigation was well developed and structured all over the country. Co-operations and agro-industrial complexes, existing at that time, controlled, maintained and operated the periphery of the irrigation systems, including small dam lakes, sprinkler and drip-irrigation fields. A governmental agency with branches in all country regions controlled, maintained and operated the main parts of irrigation systems including the bigger dam lakes specialized in irrigation pumping stations, distributive canal and pipe networks, outfits etc. The same agency was in charge for water distribution and for implementation of the governmental policy in irrigation. Since 1989 Bulgaria has undergone profound political, social and economical changes, which have affected irrigation in an extremely negative way. By now, the irrigated land is only 5-10% of the area equipped for irrigation. Water is supplied only to vegetables, orchards tobacco and some other profitable crops, which cannot be grown without irrigation. Due to the decreased water consumption, the Governmental agency “Irrigation Systems” Inc. cannot provide all financial resources for maintaining of the irrigation and drainage. infrastructure. On the other hand, Bulgarian Government tends to maintain low prices of irrigation water in favor of the agricultural producers, including subsidizing of part of the water primary cost. During the period of political and economic reforms that started in 1990, a number of legislative initiatives were implemented in order to re-establish the normal irrigation and drainage activities in Bulgaria, including (1) The Ownership and Use of Farmland Act 1992; (2) The Water Act -2000; and (3) The Water User Associations Act. Recently, a group of scientists, irrigation specialists and managers (Petkov et al., 2000) offered a program on the development of irrigation in free market environment, which was approved by the Collegiums of the Bulgarian Department of Agriculture and Forestry. According to the authors, the property of irrigation and drainage systems should gradually change from governmental to private and this process should be stimulated and supported by the Governmental policy. Water users should pay to water suppliers the real price for water supply. Irrigation and drainage infrastructure in the agricultural lands will be transferred to the Water User Associations free of charge. The role of state in irrigation and drainage management will gradually decrease. Only objects of national importance as big dam lakes, protection dams, river corrections, bank drainages and drainage outfits remain public state property and will be managed by a Governmental agency.
preuzmite pun tekst

This site uses Akismet to reduce spam. Learn how your comment data is processed. 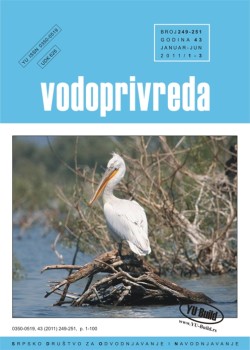